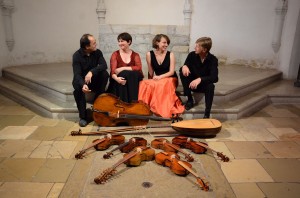 PANDOLFIS CONSORT WIEN was founded in 2004 by Cracow Music Academy graduate Elżbieta Sajka, violist, with the intention to bring rarely performed works by both well-known and long forgotten composers to a wider audience. Focusing mainly on baroque music, the ensemble is named after the viola d’amore they use, a copy of an instrument originally built by Giuseppe Galieri Pandolfis in 1728. The Consort usually performs as a four-piece (Ingrid Rohrmoser – violin and viola, Elzbieta Sajka – viola, viola d’amore and violetta, Günter Schagerl-cello, Hermann Platzer – theorbo, lute and baroque archlute). Among the distiguishing features of the ensemble is their use of the continuo theorbo cello. They have also performed with soloists, choirs and the Royal Ballet „Cracovia Danza“.

In 2011 they played the hugely successful „Johannespassion pur“ production for the „Radiokulturhaus Wien“ and also performed at the ORF Festival „Italia mia“.
Since 2007 the Consort has been featured in their own series of concerts entitled „Music at the Church of the Teutonic Order“ in Vienna.